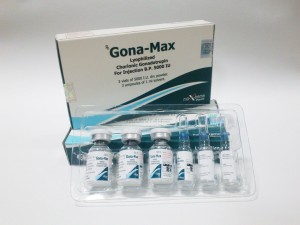 The action of HCG is virtually identical to that of pituitary LH, although HCG appears to have a small degree of FSH activity as well.  It stimulates production of gonadal steroid hormones by stimulating the interstitial cells (Leydig cells) of the testis to produce androgens and the corpus luteum of the ovary to produce progesterone.  Androgen stimulation in the male leads to the development of secondary sex characteristics and may stimulate testicular descent when no anatomical impediment to descent is present. This descent is usually reversible when HCG is discontinued. During the normal menstrual cycle, LH participates with FSH in the development and maturation of the normal ovarian follicle, and the mid-cycle LH surge triggers ovulation. HCG can substitute for LH in this function.  During a normal pregnancy, HCG secreted by the placenta maintains the corpus luteum after LH secretion decreases, supporting continued secretion of estrogen and progesterone and preventing menstruation.  HCG HAS NO KNOWN EFFECT ON FAT MOBILIZATION, APPETITE OR SENSE OF HUNGER, OR BODY FAT DISTRIBUTION.

HCG has not been demonstrated to be effective adjunctive therapy in the treatment of obesity.  there is no substantial evidence that it increases weight loss beyond that resulting from caloric restriction, that it causes a more attractive or ‘‘normal’’ distribution of fat, or that it decreases the hunger and discomfort associated with calorie-restricted diets.

Good Manufacturing Practice (GMP) is a system for ensuring that products are consistently produced and controlled according to quality standards. It is designed to minimize the risks involved in

We are committed to produce our products as per international BP/USP standards. Quality is the most important aspect at Maxtreme Pharma (with our joint ventures). We always keep

If you have any questions contact us by filling out this web form.